How to Pick the Right Motor Oil for Your Car

Given all the options for motor oil options out there, choosing the right oil for your car might seem like a daunting task. While there is a mountain of information about the various oil choices, the first step is honestly quite simple: Look in your car’s manual.

The owner's manual for your car will list its recommended oil weight, whether that's a standard format like 10W-30 or something more unusual. That number refers to the viscosity (or thickness) of the oil that you should use. You should adjust which weight and type for the seasons and your expected use of the car, which we’ll explain below. For regular use in moderate temperatures, what’s listed in your owner’s manual is fine. Always choose an oil from a brand that displays the starburst symbol that indicates the oil has been tested by the American Petroleum Institute (API).

You’ll also notice a two-character service designation on the container. API's latest service standards are SP for gasoline engines and CK-4 for diesels. These letters are based on a group of laboratory and engine tests that determine the oil’s ability to protect the engine from wear and high-temperature deposits and sludge. API has a full list of these standards here in case you’re curious, but make sure you’re buying an oil that’s been tested under a current standard. As of this writing, that includes SP, SN, SM, SL and SJ for gasoline engines and CK-4, CJ-4, CI-4, CH-4 and FA-4 for diesels. 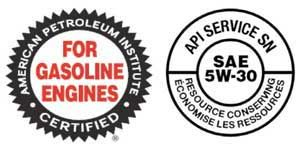 These are the labels you'll find on every container of reputable motor oil. The API doughnut on the right tells you if the oil meets a current service rating. It also provides the SAE (Society of Automotive Engineers) viscosity number and tells you if the oil has passed the Resource Conserving test. The starburst symbol on the left indicates that the oil has passed the service tests listed in the other doughnut.

Viscosity refers to a fluid's resistance to flow. Most motor oils’ viscosity is rated based on how thick it is at zero degrees Fahrenheit (represented by the number preceding the W, which stands winter, as well as its thickness at 212 degrees (represented by the second number after the dash in the viscosity designation).

Motor oil becomes thinner and runnier as it heats up and thickens as it cools. Within reason, thicker oil generally maintains a better film of lubrication between moving parts and seals vital components of your engine better. With the right additives to help it resist thinning too much in the heat, an oil can be rated for one viscosity when cold and another viscosity when hot. The more resistant oil is to thinning, the higher the second number (10W-40 versus 10W-30, for example) will be, and that's good.

Meanwhile, in low temperatures, oil has to be resistant to excessive thickening so it can still flow properly to all the moving parts in your engine. Excessive thickness can make it more difficult to start the engine, which reduces fuel economy. If the oil is too thick, the engine requires more energy to turn the crankshaft, which is partly submerged in a bath of oil. A lower number is better before the W for cold-weather performance, so a 5W oil is typically what's recommended for winter use. However, synthetic oils can be formulated to flow even more easily when cold, so they are able to pass tests that meet the 0W rating.

Once the engine is running, the oil heats up, which is why a higher second number is especially important for extreme uses and hotter-running, more complicated engines.

Why So Many Oils? 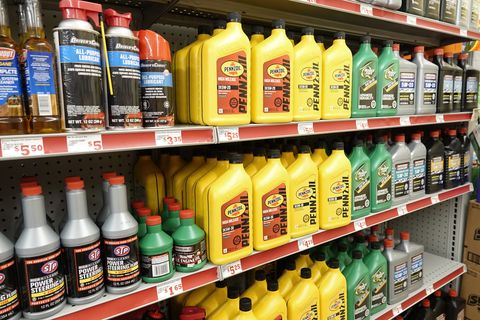 If you read your owner's manual, you'll know what oil the vehicle’s manufacturer recommended to use when it was brand-new. The manual may include a reference to Energy Conserving or Resource Conserving oils, which means that the oil passed a fuel economy lab test against a reference oil. While that doesn’t always translate to better fuel economy, most leading brands have at least some viscosities that are labeled as such.